Power Latina of the Week

Home  » Power Latina of the Week 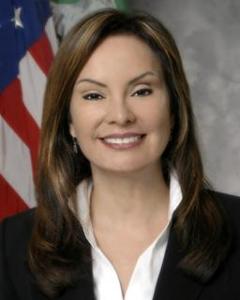 As Treasurer of the United States, Rosie Rios oversees the U.S. Mint, the Bureau of Engraving and Printing and FortKnox, and is a key liaison with the Federal Reserve. In addition, the Treasurer serves as a senior advisor to the Secretary in the areas of community development and public engagement. Prior to her confirmation as Treasurer, Rosie worked at MacFarlane Partners, where she was Managing Director of Investments.

Rios is the sixth Latina to occupy the office of Treasurer of the United States, and the third consecutive Californian.

Rosie and her eight siblings were raised by a single mother in Hayward, California, where she attended Catholic Schools before enrolling at Harvard University. After college, Rios returned to California where she became an expert in economic development. Rosie Rios was sworn in on August 20, 2009 as Treasurer of the United States. She is married to Jose Diaz Gumataotao Jr. and they have two children.